Over Christmas I did manage to get a few things out of my house that belonged to Kurt. Just thought I would share something of his with all of you.

Kurt went out to shovel our driveway and remarked how his students giggle over one of his ski jackets. One day while he was in high school we went shopping in Regina and happened to stop in at Jersey City (don't even think they exist any more) and he fell in love with a LA Raiders jacket. Since he needed a new coat we bought it for him, now his students get a kick out of his retro jacket and make fun of the fact he still wears it.
I sat and thought for awhile, and disappeared downstairs. When I came up I had a special surprise for him. Kurt came in from shoveling the driveway and I called him into the living room. There on the couch was this..... 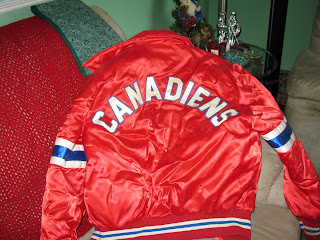 Kurt wore this official Montreal Canadiens jacket for his junior high days and part of his high school days. This was a gift from my parents one birthday, and they went through a great deal of trouble to get it for him. Dad knew a few of the old players through his job and wrote to one of them about his grandson who was a big fan. The player sent Dad this jacket (it is the same as the team wore at that time) and Dad paid for it. Kurt was so proud of this coat and wore it proudly to hockey practices where it earned him the nickname "Froggie".

The look on his face was priceless and I got called the coolest Mom ever! All because I could not bear to get rid of a small piece of his childhood and teenage years.

The coat is with him now, and I just know he is proudly wearing it once again. Oh did I forget to mention that it still fits.