The past few days have seen me in my sewing room getting costumes made for the church musical.

The first one I made was relatively simple. Just a drape to wear over one of the Altar Server robes. 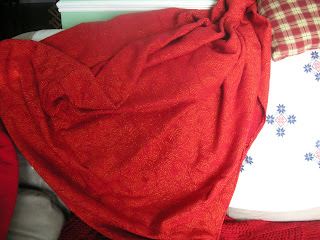 I made a tube of the fabric to hold it on the shoulder. It was simple to make, however the material was very heavy and thus the drape is not what I would like.

The second costume I made was an ivory coloured robe. 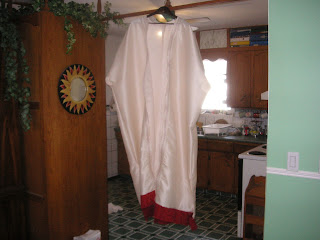 I trimmed the bottom with some of the leftover fabric from the first project. But it still needed something. 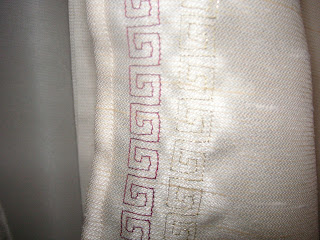 So I added some embroidery up the front and around the neck. The back still needs a bit of bling so I will think on that for awhile. I may make a belt out of the leftover red just to give it a bit of omph.

Next I started on the robe that caused me more problems than I can talk about. The fabric frayed like crazy and caused me nothing but problems. I ended up using the serger to sew the side seams, but that caused me problems with the armhole openings. Well I did the best I could considering what I was given. I ended up trimming the armholes and the bottom with purple ribbon. Think it turned out pretty good even with all the problems. This is a bit longer and the back will drag on the ground. Hope it lasts through the rehearsals and the play. 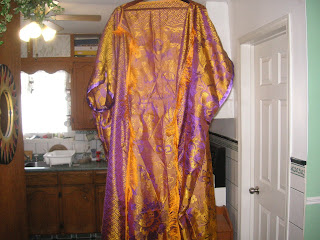 Tomorrow I get to start on the camel costumes and if time permits I may just make King Solomon another robe. Just need to figure out how to use up what I have in making it for him.