Getting Ready for a Funeral 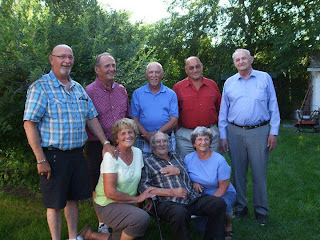 This is what was left of my Dad's brothers and sisters up until 6:10 (give or take a minute of two) Sunday morning.

Dad standing on the far right as you look at this picture. He was just 82 years old here. The family got together to celebrate the gentleman's birthday who is seated front and center, my Uncle Albert. Uncle Albert died later that year and on Sunday my Dad followed those who have gone before.

I had gone up to Yorkton this weekend to spend 5 days with him. On Friday when I got there he did not look very good at all, his eyes were closed and other than a faint movement of his head yes or no, and a slight squeezing of my hand there was no real response to stimuli. I decided I needed to get those big brown eyes of his open and gazing at the world.

On Saturday I entered the hospital and announced to Dad that I was there. His eyes bounced wide open and he grasped my hand with strength. I talked, he listened and I even managed to get him to gesture for things with his good arm.

My brother and his three girls came later that morning and were shocked at how Dad seemed to be improving. I ran out to buy a white board and large markers to try and make things easier for Dad to communicate. Since the writing did not really work as well as I had hoped, I had a relative pick up some sticky letters and made simple words for him to point to such as yes, no, pain.....

It came as a great shock to get a call from the hospital at around 10 that night, just a few hours after I left that Dad had taken a turn for the worst and the nurses were quite concerned. I called my sister in Regina, and we both headed to the hospital in Yorkton. I was staying at Dad's place so was there in about 30 minutes, Joanne took a bit longer.

We phoned my brothers to come at around 2 and close to four hours later Dad just stopped breathing.

We are having a simple service, which is what he wanted, no ministers and just his family gathered around.