In the morning we left Salamanca for Madrid with a couple of stops along the way.

First was the walled city of Avila and the hiding place of St. Theresa. 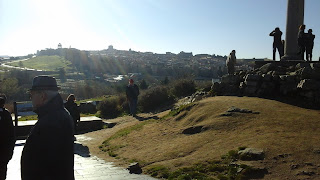 This photo was taken across the valley from the city. 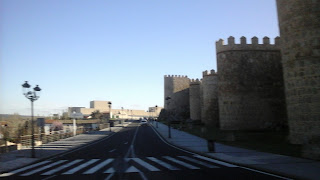 A closer picture of the surrounding walls. 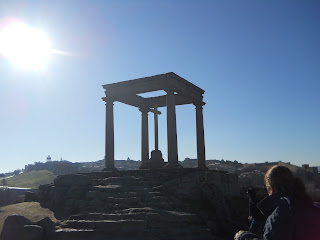 The monument built above the cave in which the young Theresa hid with her brother when she decided to become a martyr for her faith. She was going to give herself over to the Moors to be tortured and beheaded. 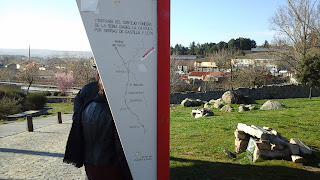 The monument is on the road that Queen Isabella of Spain traveled after her death from Madrid to her home in Castile.

We got on the bus and continued our journey to Toledo.

Here we had a walking tour.

We visited the church of San Tomao which is the home of El Greco's most famous painting, The Burial of Count Orgaz. We were not allowed to photograph the painting so I am borrowing a picture from the internet. 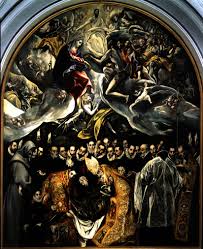 We followed pathways through the city to see the various areas.

This is a picture of us entering the old Jewish section of the city on our way to the Synagogue. 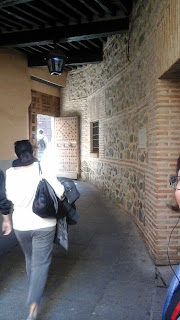 Some pictures of the restored Synagogue. It seems that Napoleon used it as a stable for many years. 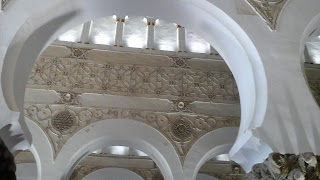 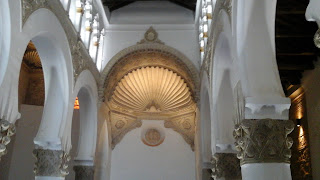 Notice the Moorish influence, probably because the builders were Moors. Still it was a beautiful building, peaceful and cool.

The next place we visited was a factory that did beautiful jewellery out of Toledo Steel and thin bands of gold and silver that were hammered into the softer metal. Harvey bought me a beautiful bracelet for my birthday and our anniversary (only 9 and 10 months ahead of those dates).

We entered Madrid just before supper and had a quiet night eating at the hotel rather then trying to find a place outside.