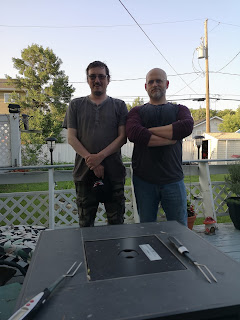 It was wonderful having the boys here together for a few days. Kurt stayed for just a week, but managed to do lots around the house that we just could not accomplish. Kris did some techie things for us as well. Even on the hottest day of their time here both of them dug out some old stumps so their Dad could plant grass.

Once they were gone I started to deep clean their rooms. Now that is done I can start on the rest of the house before the garden produce takes up much more of my time.

However the massive clean up of their rooms did cause me a few problems. I ended up with a massive backache and had to rest for a bit. I could only sit for so long, and needed to walk around every so often. It is better now, but did come back after picking raspberries a few days ago. Rested, took a pain killer and things seem to be better again.

I didn't get as much done on my projects as I had hoped but will share with you what I did manage to do.

I worked on those scarves for my Secret Santa gig. I actually might finish one more than I had planned. 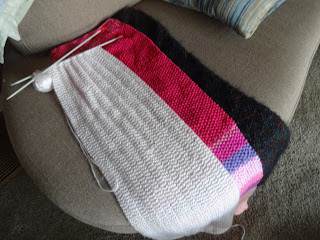 Just a few more inched on the pink one and then I will weave in the ends of yarn. 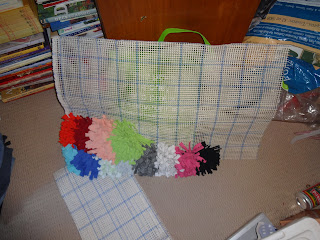 Got a bit done on the rug. Boy it takes awhile to get those strips in but after a week this is what it looks like. It is even pretty cushioning to stand on which is a pleasant surprise.

I also managed a bit of cross stitching. 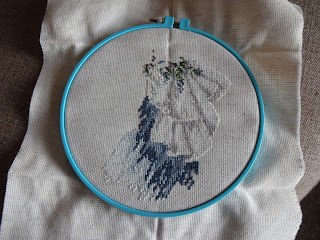 The angel is slowly taking shape.

More tomorrow after I pick even more raspberries.