Last week we got about 12 inches of snow, and then we were hit once again.

Highways were closed in and out of the city, city roads were blocked by stalled and stuck vehicles. The poor police were constantly on the move helping those foolish enough to be out driving in this mess. 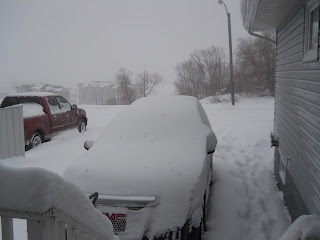 Harvey had done a bit of shoveling before this picture was taken (about an hour before). There is about 12 inches of snow on the car, and it was still coming down. By the end of the storm we had received approximately 15 inches of the white stuff.

Today Harvey spent about 2 1/2 hours digging snow and blowing snow. The snow has stopped, but the wind has risen throughout the day and the temperature is dropping.

I pulled out my draught dodgers and laid them in front of the doors tonight. When the wind comes up it seems like it finds any little crack to come into the house. The hall has been freezing today so hopefully this cuts heat loss a bit and keeps the warmth in the hall.

We have been spoiled the last few years, it has been a very long time since we have had a blizzard or back to back snow storms. While we have had freezing temperatures, we were kind of wishing the real cold would hold off until well after Christmas. I have a feeling we are in for a seriously white and freezing winter season.