Yesterday we said our good byes to Sister Adelaide (or as she would often remind some of us that were close to her Sister Lemonade, cause you know it rhymes with Adelaide). 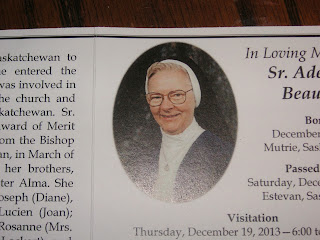 This picture was taken for her 75th anniversary as a Sister of Loretto just two years ago. We had a joyous celebration and the memories of working on it will be with me forever.

Today, Kurt arrived home from Alberta. The bad boy teased me and said the roads were so bad he had decided to stay in Moose Jaw tonight and travel home tomorrow. Of course gullible me thought nothing of it. About five minutes later I got another call from him saying he had decided to try to come home after all. I, tried to convince him that if the roads were that bad he should wait until tomorrow and travel while it was still light. Kurt started to laugh and then said "Look out the front window Ma." There he was, getting out of his car and laughing at me. Boy has he ever learned to pick on his poor mother from his dad. Got to get both of them back somehow.