Yesterday my sister and I traveled north to Esterhazy. We helped lay our Aunt Irene to rest. Uncle Albert (my Dad's brother) had journeyed on a few years ago and according to her children Auntie Irene seemed to loose interest in anything.

My sister, Joanne and I were the only relatives from the Koch side to attend. Considering some live only 30 minutes away both of us felt very bad.

Aunt Irene and Uncle Albert had 10 children. They also raised one grand daughter. Bradley, one of their sons passed away in an accident in 1976 (the year I got married). I was right between Bradley and his older brother Robert in age so both were my playmates when we would visit.

I managed to get a picture of the remaining children, guess I should say grown ups now. 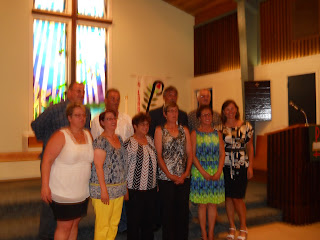 They are not often all in one place and it was wonderful to get to see all of them again and reconnect.

Saskatchewan is under an advisory for the next few days. There are many fires in the north of the province and the wind is sending the smoke every where.

Driving home from the funeral yesterday was terrible. There were times I could only see about 1/4 mile ahead, visibility was so reduced from the smoke.

About one half hour after we got home this is what it looked like. 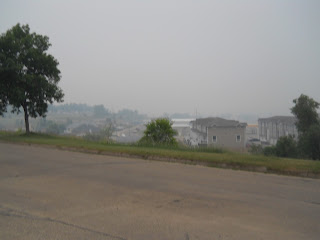 I could not see the other side of the valley and at times the rather large condos below us were obscured as well.

Today is a bit better, but that could be due to the rain we have gotten today, and the wind changing direction slightly.

Labels: family, living on the prairies