After Mass, since I had the entire house to myself, I decided that there were a few things that needed doing while Harvey was not underfoot.

After changing quickly, and having a very light lunch I got started. First I cleaned out the freezer of most of those things that slipped to the bottom and were old or freezer burnt. I then got a bucket of soapy water and washed down the washer, dryer, upright freezer and chest freezer. They are sparkling clean now.

I had a rather large box of hamburger patties in the chest freezer so I removed them and repackaged them so they take up much less room.

My friend phoned and asked if I wanted a break so headed over for a talk and a cup of coffee. Met the new neighbours moving in across the back alley from me. They seem very nice.

After my break I washed the walls in the hall and kitchen. Cleaned all the pictures and even cleaned the candle holders. Smells absolutely wonderful.

That was the extent of my cleaning for the day. I was tired out by the time I finished, so I curled up on the recliner with my counted cross stitch and watched old CSI NY episodes on the tv. I did turn it off to catch the last three minutes of the football game. I needed to know if Harvey and Kris would be happy with the outcome. The would be over the moon. The Saskatchewan Roughriders won the first half of the series. They won what has become known as the Labour Day Classic. Now it's on to the Banjo Bowl (strange name) in Winnipeg for the second half. 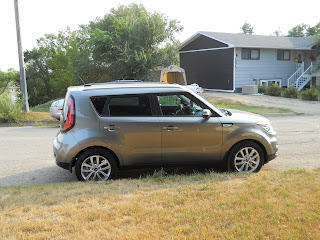 This is a picture of Kris's new car. He loves it and I think it would be the type of car that would grow on you. It is a Kia Soul and in some lights looks almost green. However it is a titanium grey colour. The gas mileage is unbelievable as the car isn't even broken in yet and got approximately 40 miles to the gallon on the highway home. Should mean he will be able to cut fuel costs.

Off to do some blog reading and then some knitting.