After I had made my post yesterday, we, as a province learned some heart rending news. A junior A hockey team bus had been involved in an accident, there were fatalities, and serious injuries needing our air ambulance services.

I woke up to learn this morning that 13 boys ranging in age from 17 to 20, their head coach and the play by play announcer were dead. Four more were in critical life threatening condition, and the remaining 11 had injuries ranging from paralysis to a few broken bones. Later today we learned of another death.

This has devestated communities across the prairies. When you reach this level of hockey, you move around in order to play. Our junior A team here in Estevan is made up of not only players from around here and our province, but from Alberta, Manitoba, British Columbia, and the United States.

Our boys grew up playing hockey in the winter. Hey, we live in Canada and I think it is expected. While neither of them played A hockey, travel in the winter was just something we did. I can not remember a game being canceled because of the weather or the road conditions. Hardy prairie folk like us just hopped in their cars and drove. We did travel together so we could help one another out, I do remember stopping to pull someone out of the ditch that and taking another boy to the rink when his mother hit a deer and needed to wait for the RCMP.  Back in the day every small town and village had a hockey team or 4. Travel was a way of hockey life, something you just did.

Now I shudder to think of the miles we put on every winter and am so grateful that nothing happened.

My thoughts an prayers are with the Humboldt Broncos management, the families of those boys who have died or been injured. 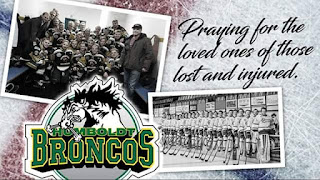