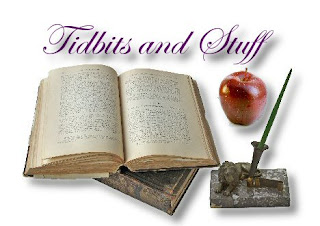 It has been an upside down kind of day. Things started off very well, but got worse as the day progressed.

I got up, had coffee and started the salsa. My recipe is one from Company's Coming a series of Canadian cookbooks that I really like as the ingredients are easy to find. I will share it with you all on Saturday. 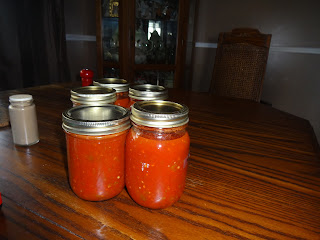 We are not big salsa eaters and so these 5 jars will last us the winter. Still lots of tomatoes to use and I must figure out if I want to make more. Surprisingly the recipe said 5 pint jars and that is exactly what was made.

I then went shopping and I was in and out before Harvey was even dressed. That was after dropping the donation bags at the Salvation Army. The store decided to move a few things around so I had to do a bit of a search even.

After lunch I decided that I had better use up the eggplant and so started my Eggplant parma.... I turned on the oven to warm it up as I sliced and peeled the eggplant and got started with the coating. Hmmm, all of a sudden my stove made a strange noise. I didn't pay any attention and continued with my task. The eggplant was ready to be baked to a golden brown and was put in the oven. Surprise my oven would not heat up past 270F and it needed to be at 350F. So I kept fiddling and even though the temperature said it was correct it kept dropping. I left them in to see what would happen (they didn't get as baked as they should have) and read my manual. I think the baking element is gone, and once I figured that out made a call to someone to fix it. Lord knows when we will hear from him.

Now those trays of eggplant needed to be made into parma and I  had no oven to bake them. What to do.

Thank heavens we are able to buy a few things without worrying about where the money is coming from anymore (there was a time when that was not the case). I quickly drove to Walmart and searched the shelves for a large toaster oven. Found exactly what I was looking for (can you believe this large one was less money than a smaller one?) grabbed it and headed home. 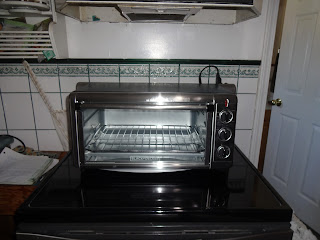 I did have to bake them one at a time, but at least there are 4 meals in the freezer. 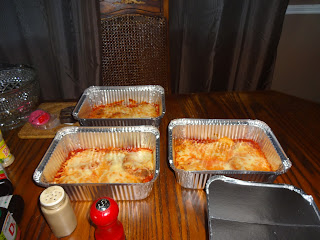 All labeled, cooled and put away.

This one, however became our supper. 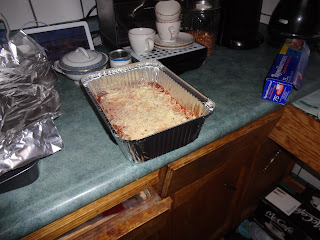 I was just too tuckered out to make the stew I had planned. I will do that tomorrow.

Now I just have to figure out where to store the rather huge new appliance I now have. Has to be fairly close to the kitchen because until the oven is repaired I will be using it to make meals. Next thing I will try is cookies, I think I have a small enough cookie sheet to fit.

Labels: processing the garden, this and that