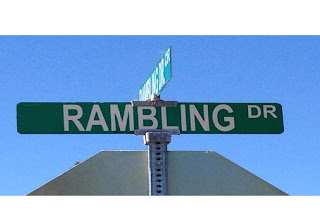 It has been a relatively quiet day. We went to 9 am Mass which is a first for us. I actually thought that perhaps, just perhaps, Father wouldn't ramble on and on....Didn't quite work out that way. It wouldn't be bad if he didn't speed up so much that we have trouble understanding him. Once that happens I find myself contemplating the stained glass windows and doing the Stations of the Cross in my head.

This time I had something else to contemplate. As I gazed at the large stained glass behind the altar, I noticed something on the roof. Hmmm, I thought when did we get fire extinguishers (the water type) added to the ceiling of the sanctuary? So I looked around the roof, there was only one in the whole church. Strange. As I squinted to see this fixture a bit better I realized it was a bat. A fairly large bat hanging there.

All that I could think once I realized what the rather large black thing hanging from the roof was, all I could do was pray. I just kept asking God to keep that bat attached to the roof and not let it fly around.... I could just imagine the screams if it happened to fly at someone.

We came home, I ate a light breakfast (well say lunch) and headed out to the garden. Three more cukes picked, and a number of both large and small tomatoes.

While out there I glanced at the eggplant. Yep I will be needing to pick those and make Eggplant parma for the freezer this week. I am hoping that I get enough tomatoes to make a batch of salsa as well.

I took some cukes to a neighbour and visited with them for a little bit. Both are not healthy and I think pretty darn lonely. I am going to make an effort to get over there a bit more in the coming months.

Then the small tomatoes were quartered thrown in a bag and put in the freezer. I am hoping to gather enough to make a few containers of red sauce.

It is warmer today and since the air conditioner is coming on I decided to bake a cake. 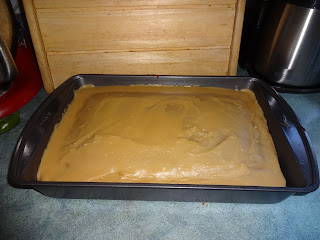 A spice cake with caramel frosting. I haven't made one of these in a very long time. It should be able to handle our sweet tooth for a bit.

I finished cleaning up files on the computer, and from there went into the disaster that is my sewing/craft room. I managed to get a bit done in there as well. At least now I can actually move around most of the room. Still a great deal to do in there, but I am starting to see surfaces and the floor (for the most part). I will probably do a bit more tomorrow. Perhaps getting the mending done would be a great start.