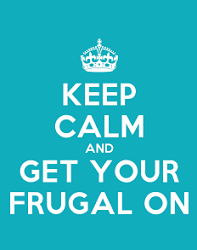 We are entering another weekend and once again are under a snow/freezing rain advisory. It seems as if almost every weekend since the beginning of the year has been this way.

Frugally this could be a good thing, but moral wise it is the pits!! Kris was going to come home again to actually go fishing this time, and now can't. We are all hoping for better weather for the long weekend which starts next Friday.

We may have to be extra frugal over the next month in order to pay our electric bill. The electric company here estimates for two months and gives us a reading of the meters every third month. Well this months estimate is super high. I don't think we have ever had a bill this high, in fact it is over half of Harvey's pension, which has never happened before. Electric is usually the major portion (after groceries) of our budget.

To off set this we will be closely watching what we spend throughout the month and rethinking some of the things we take for granted.

I have been very good at using things up this past week. In fact I have started to pull out and use the hair conditioner samples once again. I find I can get at least two uses out of each small bottle, sometimes three.

I have also been using up the mouthwash samples in the mornings. Since there are many sample sized toothpastes those will be put into use as well.

Harvey pulled out a thermostat he bought for one of the base heaters and installed it today (after the shock of the electric bill). It is programmable so hopefully this little frugal step will help control the heating costs. He plans on turning the heat in the family room down at night when no one is downstairs.

I have spent the last week making sure lights are off in rooms not in use, and thinking of ways to change the menu so that the oven and stove are not in use as much. Many things I planned on making can be done in the slow cooker and I may pull out the portable roaster oven to use for roasting and baking.

I will let you all know in two months if this has made a dent in our energy consumption.