As I have mentioned before I am on a quest to get things straightened up an reorganized in the sewing/craft room. Since I can not do more decluttering of fabric until I get my sewing mojo back (hopefully this weekend I will be able to look at the patterns I have cut out and get at least one or two finished up), I decided it was time to go through the binders of patterns for crafts, knitting and sewing I had saved over the years.

Two days later I had removed all the double patterns I had printed out (at least I hope so) and managed to cut out 6 binders. Yea me!!!

Then I looked at all the cross stitch pattern books I had bought over the years. Lovely magazines just filled with patterns that I was going to do. Did I do them? Not a chance. 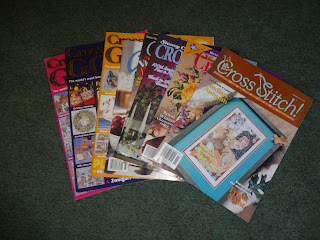 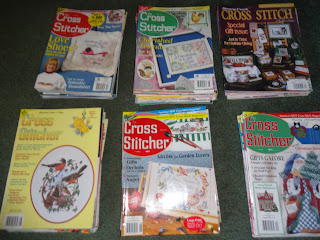 So I pulled them out of the bookcase and put them in groups of 10 listing them on our garage sale site. No takers as of yet, but I will leave them up for another couple of days. Then if they still not taken I will load them up and take them to the Salvation Army.

I thought I would share a picture with you of the miniature that Kurt brought back from the UK for me many years ago. 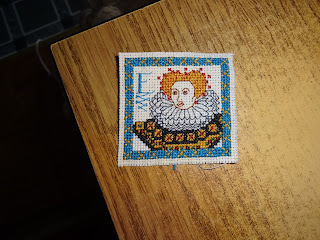 I went a bit cross eyed completing it.