Using Up Those Pesky Leftovers 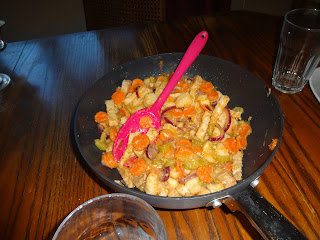 Tonight I tried to use a bag of leftover pork roast in this dish instead of fresh pork. Turned out not too badly, but I think it could have used a bit more sauce and since I didn't have the French green beans I left them out. Didn't have hash browns either so I tried to make my own.

Combine first 7 ingredients in a small bowl and set aside.

Heat second amount of oil in same wok (or pan) and add the onion. Stir-fry for about 1 min.

Add hash browns, carrots and celery. Cook about 4 mins. stirring often until potatoes start to brown and veggies are tender crisp. Add the pork and green beans. Stir cornstarch mixture and cook on medium until the sauce boils and thickens.

Harvey had an extra helping so he liked it making this a keeper. However, I will tweak it a bit next time by doubling the sauce, adding more garlic and using bought hash browns. My home made chunky hash browns were falling apart rather than browning.