Kurt bought me a cupcake maker as a birthday present, and yesterday was the first day I got to try it out.

I, however, did not make cupcakes. Instead I decided to use up the two over ripe bananas on the counter and make some banana chocolate chip (cause things always taste a bit better with chocolate) muffins.

The great thing is that the muffins cook very quickly and since the cupcake maker is a plug in appliance uses much less electricity. Thus saving time and electric costs. Running an oven uses a great deal of power. 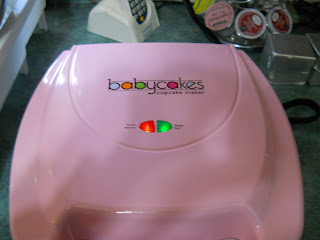 Here is the machine heated up and ready to go. 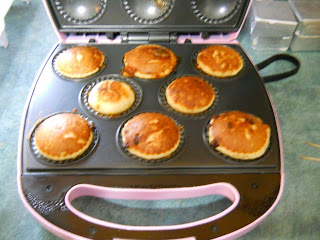 The baked muffins ready to be taken out of the maker. It makes 8 at a time.

They are a hit with both Harvey and I.

I hope to get some real cupcakes made by the end of the week. That nasty old sweet tooth is acting up something terrible. These are just about three bites so just a bit smaller than one made in my pans in the oven. Perfect to take the edge off.

This morning I was in a rush to get off to work and forgot to get something out for supper tonight. Well I actually forgot to get out the leftover roast pork..... So instead of the stir fry I planned on making I ended up pulling what we were going to have for dinner on Saturday. Nicely warmed cabbage rolls. They hit the spot and I did not use something that was not at least planned to be used up.